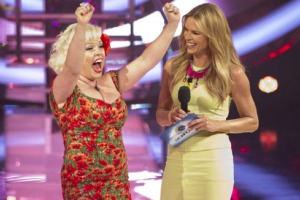 With ‘Big Brother’ promising more secrets and twists in its massive return this year, fans are asked to vote to ‘save’ rather than evict their favourite housemates.

Whilst Layla received 49% of the votes, and Estelle 27%, the housemate that least wowed the Australian public was Charne with only 24% of the votes.

Suffering from obsessive compulsive disorder, the 31 year old housemate told host Sonia Kruger that “two weeks is enough.  It’s hard getting used to not having anything to do.”

With Charne gone, there are now 13 housemates left to entertain Australian audiences, with two romances already budding between Estelle and Ryan and Layla and George (coincidence that these two girls were nominated?).

After another week of witnessing housemate shenanigans, Australia will farewell a second housemate Sunday night, which will be a male.  After failing to correctly identify all female housemate secrets in last night’s challenge, all male housemates are up for nominations tonight.

In case you missed it, these were the female housemate secrets:

“I have Obsessive Compulsive Disorder” – Charne

“I am a high school dropout” – Estelle

“I was a nude protester” – Sarah

“I was a Champion Weightlifter” – Angie

“I am a member of a Royal Family” – Layla

Do you watch Big Brother? Are you loving it?