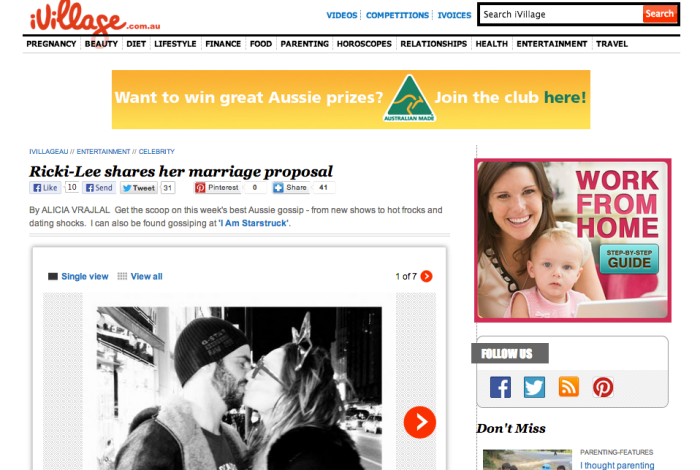 Ricki-Lee has posted a video on her Facebook page of her fiance proposing – in Ugg slippers and Mr Happy boxer shorts, bless!

Richard Harrison, her boyfriend of three years, popped the question over Christmas and decided to video the romantic moment for posterity. But, dammit, all we got was a view of his posterior instead. Sadly, the camera angle he chose means his boxers obscure her reaction.

She tweeted: “He wore Mr Happy boxers, he serenaded me, then he asked me to marry him. And he got it all on camera…awwwww!”

Love was in the air last night in the Aussie Twitter world because drumroll please…. It was Valentine’s Day!

Celebs including Jennifer Hawkins, Ricki-Lee Coulter and Rhiannon Fish happily posted their red rose deliveies and heart-shaped chocolates on social media so we could feel the love.

Kate Ritchie returning to Home and Away

Home and Away fans were beside themselves on Monday when cast favourite Kate Ritchie announced she was returning to the Channel 7 drama.

She insisted she’s proud to be associated with the show, unlike Melissa George, who threw an on air hissy fit after Home and Away was mentioned in an interview last year.

When asked about the comparison, Kate laughed and said: “I guess I’m not like Melissa”.

Kate first appeared on the show at the age of 8 and played the role of Sally Fletcher for 20 years until departing in 2008 to pursue other acting roles and radio work.

She will be filming a short stint for the show’s 25th birthday special, which will be screened later this year.

It was only last week that Miranda Kerr strutted the David Jones Autumn/Winter catwalk, and now the Aussie model has been announced as the ambassador of the Kids Helpline.

The Kids Helpline provides support and counselling to young people aged between 5 and 25 and Miranda intends to raise community awareness of issues faced by young Australians.

At a media call on Tuesday at Sydney’s Luna Park, Kerr said, “I want every child in Australia to know that there is someone who will listen to them, someone who can talk to them, no matter how big or small the issue…I have a voice now, and it’s important for me, personally, to use that in a positive way.” 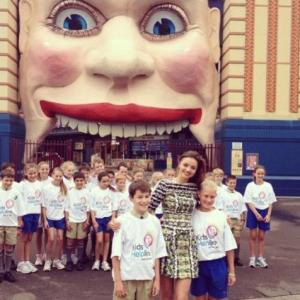 Model Didier Cohen has been confirmed as the fourth judge in the 2013 series of Australia’s Next Top Model.

Being a frequent object of ladies’ attention himself, the single model has ruled out any chance of romance with the top model contestants.  He told The Daily Telegraph: “I’m a role model and a judge and a mentor to these girls, so that definitely won’t be happening.”

Australia’s Next Top Model is set to hit screens in June.

Channel 9 has finally hopped onto the reality cooking show bandwagon with new program The Great Australian Bake Off set to hit screens later this year.

Hosted by Shane Jacobson and Anna Gare, the cooking competition is based on the UK version of the show and will be judged by Kerry Vincent and Dan Lepard. 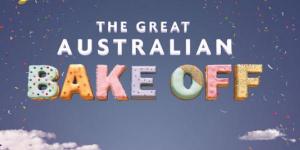 Lock up your daughters (and even perhaps restrain yourself) – the Cleo Bachelor Of The Year judging is underway.

Held in Sydney’s Double Bay on Thursday, the Cleo Bachelor judging lunch required female media personalities including Jesinta Campbell and Charlotte Dawson to perform the difficult task of inspecting over 200 shirtless men and selecting the finest 50.

Cleo editor Shari Markson said: “This year we’ve managed to get the absolute crème of the crop from business and finance, politics, sport and celeb-land, and there’s quite a few hot tradies in there too … It’s now over to our 25-strong judging panel, who represent a wide spectrum of the entertainment and media industry and are ideally placed to select our Top 50 Bachelors for 2013.” 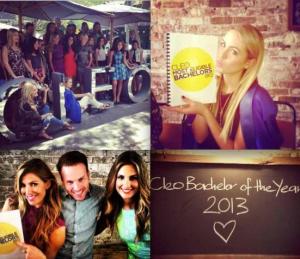