Australia has chosen a new leader.

To say that the 2013 election trail has redefined political campaigning is an understatement.  In a period that faces the issues of economic recovery, asylum seekers, carbon taxes and gay marriage, the build up to the 2013 election has seen a leadership change, biased media coverage, gaffes, selfies and sex appeal thrown into the campaigning mix.

Take a look at what you need to know the morning after our new government has been elected.

“The boats will be stopped.  The budget will be on track for a believable surplus. And the roads of the 21st century will finally be well under way.  And from today, I declare that Australia is under new management and that Australia is once more open for business.”

“I know that Labor hearts are heavy across the nation tonight and as your PM and as your parliamentary leader of the great Australian Labor Party I accept responsibility. I gave it my all but it was not enough for us to win. I’m proud that despite all the prophets of doom that we have preserved our Federal Parliamentary Labor Party as a viable fighting force for the future.”

“Friends, you have had a hard day, so let’s bring this to a close when I say throughout our history, we the Labor Party have been a party of hard heads and soft hearts. That is the genius of Labor, always attending to the tough questions of the economy and national security through war and through peace, through depression and recession, but never allowing our hearts to harden to those of our Australian family who are the most vulnerable. It is this combination which is the unique.”

The new prime minister embarked on a bike ride 6:30am this morning, followed by an address to media outside his Sydney home.

“This is essentially a working day… I will be getting briefings from senior public servants,” said the prime minister elect.

“People expect the day after an election the incoming government will be getting down to business.”

“I will not be reconteseting the leadership of the labor party,” said Rudd during his concession speech.

Political commentators are tipping the top three favourites take on role of new Labor leader to be: 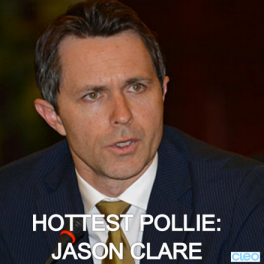 In a quote that sent shockwaves through his campaign, Mr Abbott referred to Lindsay seat member Fiona Scott as a Liberal party candidate with ‘sex appeal’.

Following the gaffe, young women’s magazine Cleo launched its own ‘Sexy Politicans’ survey, asking readers to rank pollies according to their ‘sex appeal’.

Labor’s seat member for Blaxland, Jason Clare, topped the poll as hottest politician, even being described by media commentators as the ‘Rob Lowe of politics’.

Battle of the daughters:

Kevin Rudd and Tony Abbott had an abundance of moral support by their sides during the election campaign.

Rudd’s daughter Jessica and granddaughter Josie joined the then prime minister on the road, whilst two of Abbott’s daughters Bridget and Frances also made appearances throughout the campaign trail.

Jessica Rudd also enlightened female voters of the behind the scenes of politics through her columnist gig for Cleo Magazine, whilst Bridge and Frances Abbott shared their views with fashion glossy Harper’s Bazaar.

“I’m not someone who wants to see radical change based on the fashion of the moment,” said Tony Abbott in a media interview just weeks ago.

Labor’s Anthony Albanese responded to this comment, saying “To define sexual orientation as fashion of the moment will be deeply offensive to many Australians.”

The last week in particular has witnessed heavy discussion around journalistic bias towards certain political parties after this newspaper cover was released. 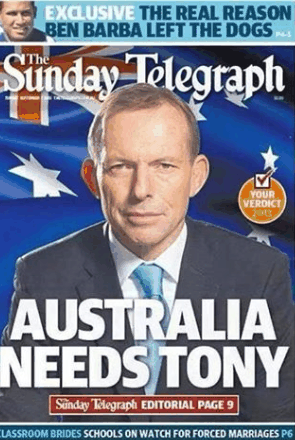 One thought on “Election 2013: The Morning After”